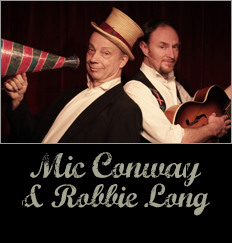 In a circus of comedy, music and magic, Mic Conway and flat-picking guitar champion Robbie Long present an hilarious array of idiosyncratic songs that will make your jaw drop, toes tap and sides split. Best known for his tongue-in-cheek humour as lead singer of The Captain Matchbox Whoopee Band, there’s also juggling, fire-eating, magic and mayhem. Stripped back, irreverent, and shameless… this is surreal vaudeville for crooning and swooning.

Based in Sydney, Australia, Conway was born into a family of vaudeville theatre and opera singers. In the 1970s, he and his brother were founding members of CIRCUS OZ. Mic has toured across Australia, Britain, Germany, USA, New Zealand and Asia delighting audiences of all ages. He has written and recorded many albums and worked in theatre, music, cabaret, television and film. He is also front man for the 5-piece ensemble – Mic Conway’s National Junk Band. 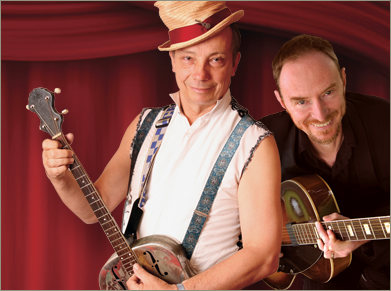